My subscription to Architectural Digest yields many nuggets but a recent gem is a heads up that next month Rizzoli is publishing a book. “100 Buildings: 1900–2000“. A Pritzker award winning architect, Tom Mayne, compiled this list by sending questionnaires “asking prominent architects to list the 20th-century buildings students ought to know“. The book includes photos, words, and drawings edited by Mr. Mayne and his colleagues at the Now Institute. Please understand that my topic for the day, 100 Great 20th Century Buildings, is a clear refernce to this work, but I am not shilling for the book. Rather, my goal is to share this work with others who enjoy architecture as much as I do. 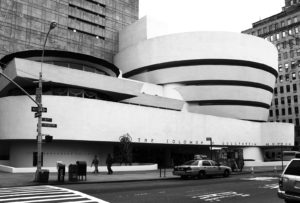 The publication is populated with many of “the usual suspects” when it comes celebrated architects and their work. So be it. These buildings inspire awe and scorn, sometimes in equal measure. Again, I say, “so be it’. We all know the names, Le Corbusier, Frank Lloyd Wright, Mies van der Rohe, Frank Gehry, Phillip Johnson, Robert Venturi, Richard Rogers, Eero Saarinen, Zaha Hadid, Marcel Breuer and many more . Sometimes the works defy words. The term “iconic” does no justice to Mr. Wrights museum above. Equally, describing what Mr. Saarinen achieved for TWA below  as merely “soaring” is woefully inadequate. 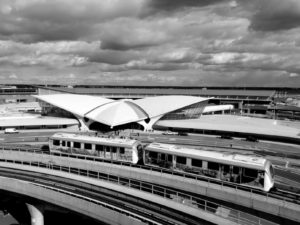 A few more works that immediately catch my eye are Johnson Wax, Fallingwater, the Sydney Opera House, the Gamble House residence , Lever House and Villa Savoye by Le Corbusier which garnered the most mentions in the survey.

A bit more on the results in the book. The United States was the most represented nation with 32 projects. Le Corbusier led the way with eight examples of his work, followed by Wright and van der Rohe with five. Sadly, women were rather under represented and “surprisingly few of the winning buildings are by living architects“. 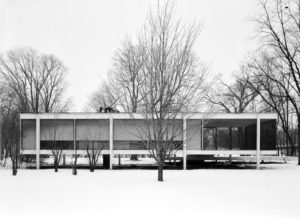 In conclusion. if architecture motivates you or perhaps you simply enjoy it then perhaps this compilation is for you. As always thanks for reading.