The Arts and Crafts movement began in Europe, and in particular Britain, around 1860. Generally considered a reaction against Industrialism, its leading proponents, such as the influential designer and writer William Morris, advocated traditional craftsmanship and simple form. Why not narrow this down to Arts and Crafts Fireplaces.

In the United States, it can be argued, that the Arts and Crafts approach led to the Craftsman and Mission styles and also to The Prairie School of Frank Lloyd Wright and his followers. So, again in the interest of “blog brevity”, let’s review a few representative Arts and Crafts Fireplaces.

Always associated with the Arts and Crafts movement, the architectural firm of Greene and Greene was founded in Pasadena, California in 1894. Perhaps their seminal effort, the Gamble House, was designed for a member of the Proctor and Gamble family in Pasadena in 1908. Taking the Craftsman esthetics and enlarging the bungalow, this work is now considered a classic of the genre. 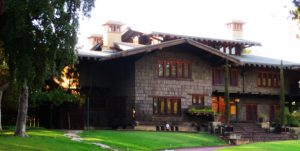 Let’s take a peek at a room in the Gamble House prominently featuring a fireplace. It is easy to observe the simplicity of the mantle and vertical elements of the surround. A signature area associated with the Arts and Crafts style is the inglenook or seating areas surrounding the fireplace. Lastly, and again Arts and Crafts consistent, is the tile work in rectilinear and modular shapes. While the space, in its entirety, might be a little ponderous for my taste, probably owing to the influence of the wood, the fireplace area on its own merits demands historical consideration.

Whether you see the direct line from the Arts and Crafts movement to The Prairie School as faint, dotted or bold is up to you. The fact remains the line exists. While Mr. Wright is most closely associated with this school of architecture, Purcell and Elmslie, Architects, with offices in Chicago, Philadelphia, and Minneapolis, were heavily commissioned also. 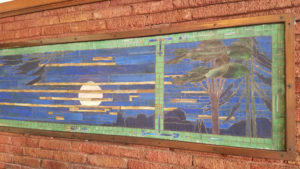 Their work in the Adair Residence, in Minnesota circa 1913, features a fireplace that we should look at below. While the brick work seems pedestrian, the mosaic in its curvilinear form is outstanding. This mosaic style was also featured above the fireplace in the Hoyt House, also in Minnesota, 1913. 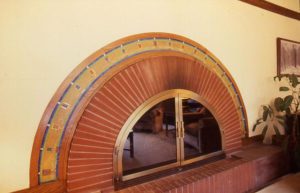 In conclusion, I hope an Arts and Crafts fireplace is in your design plans, take advantage of the expertise of a professional designer in your area. Please check out Pasadena Craftsman Tile, the provider of the image at the top of this post. As always, thanks for reading!