September has brought more than just football and fall to the international tile and stone community. This week, in Bologna, Italy, an event known as the CERSAIE International Tile Exhibition opens. In the words of the event organizers, “in 2017, for its 35th edition, Cersaie has chosen to have two different images in order to draw attention to its two main product sectors: ceramic tiles and bathroom furnishings”. 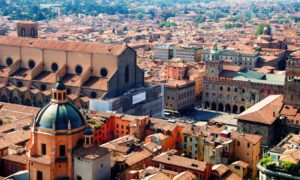 At the top of this post is the image selected to represent the event. The winning submission came from two students who described their inspiration as follows. “Ceramics is breaking away from its traditional format to become something new; Developments in technology and design are projecting this material into the future as part of a process of constant metamorphosis. The starting point for the design was the pure forms of the square, circle and triangle, which were fused together to create a living, evolving geometry; the false perspectives allow for an open dialogue with each user as they offer scope for different interpretations”. Their discussion on the purity of shapes such as squares, circles and triangles has always been part of the charm of ceramic, stone, glass, and terracotta tiles.

One of the more interesting aspects of attending this show is the wide variety of design mediums on display. In addition to what we have already discussed, you will find stone quarries, glass mosaicists, porcelain tile manufacturers , etc. For example, below is Turkish quarry Tureks. They always offer a few innovative touches that Munir Turunc will bring here to the United States via  Marble Systems. 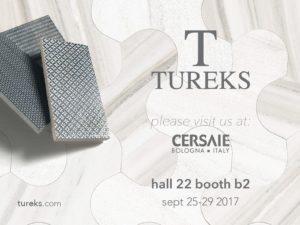 In conclusion, in the next few months, items premiered in Bologna will reach our shores and be available in high quality showrooms across the country. Thanks for reading and a special shout out to Scott Hyman representing the Brownsville Boys!