The most perfectly symmetrical marriage of design and commerce in the ’60’s may have been the union of Eero Saarinen  and TWA at what was then Idlewild Airport in New York City.  Opened in 1962 amidst much futuristic and design fanfare, the TWA Flight Center, as shown below, was a beacon for airline travel, design triumphant, and internationalism. None other than Robert A. M. Stern called it the “Grand Central of the Jet Age.”

Mr. Saarinen was a Finnish-born and Yale-educated architect whose career included being a colleague of Charles Eames, the designer of the Gateway Arch in St. Louis and a Knoll furniture contributor; his truly legendary “Tulip” chair for Knoll is below via Wikicommons. 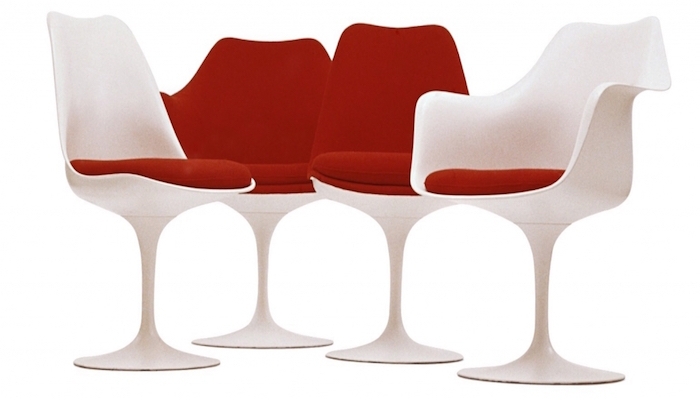 n 1955 Saarinen’s Detroit architectural firm was commissioned by TWA to design their terminal in New York. A key vision of his in the design process was that the future of air travel was as mass travel. Therefore, how to speed it up logistically was a critical problem. The result of this vision was much more than just the soaring wing exterior that the building became so famous for. Consider these innovations.

Although these elements remain, TWA went the way of so many of its illustrious fellows. Household names such as Pan Am, Braniff, Eastern, and many others never survived the transition in air travel from a luxury experience to essentially mass transit. Idlewild became Kennedy and time marched on. The TWA Flight Center fell into disuse and the famous architect died during surgery before his mid-century landmark was completed. 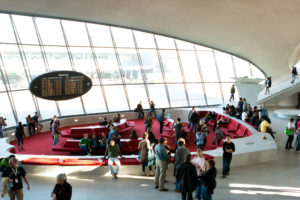 The terminal ceased to function in its original capacity in 2001. Luckily, it was saved from an ignominious fate by the National Trust for Historic Preservation a few years later. More good news was announced during the summer. The site will become the The TWA Flight Center Hotel and is scheduled to open in 2018. There is hope for the legend that is Eero Saarinen and TWA to live on for generations to come. Thanks for reading