Why is MidCentury Modern Style intriguing us over half a century later? In fact, what is it really all about? Who drove its adoption and when? What are its key elements? Let’s wander around this topic for a while and see what we turn up!

The period is arguably considered as dating from the mid-thirties to the mid-seventies. Naturally, there is much in the way of debate on this point. For example, I have always felt that it looks and feels so fifties and sixties that it is hard for me to see past that association. Nevertheless, you get the idea! 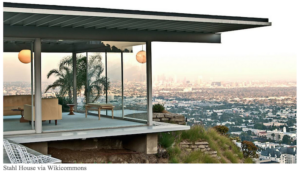 Who drove the style is equally interesting. It is simple to think of many of its aspects as being outgrowths of the Bauhaus and International schools. So the usual suspects of Gropius, Le Corbusier, Breuer, and Mies van der Rohe (as shown at the top of this post) come to mind. But not so fast. This somewhat organic American iteration may be more aptly represented by the likes of furniture designers George Nelson, Edward Wormley, Eero Saarinen, Harry Bertoia, Charles Eames, and Jens Risom, pictured left to right below. 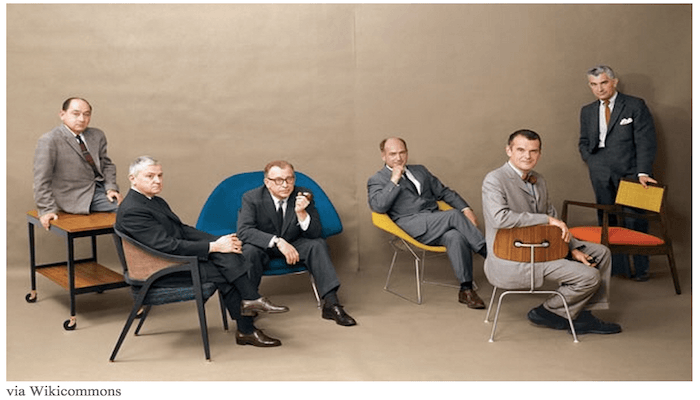 Now, can we say what defines Mid-Century Modern Style? Sian Winship, of the Southern California Chapter of the Society of Architectural Historians said for HGTV that the houses had open floor plans and giant sliding-glass doors, which encouraged people to go outside and be healthy. In a traditional home, the window height is 4 to 5 feet, and you can’t see out as a child. With these walls of glass, children became engaged and open-minded because the environment stimulated the senses in a different way.”  Then add somewhat of a flat plane approach as exemplified by flat roofs and the elevational changes that inspired the term “split level” and you begin to build an element by element picture. 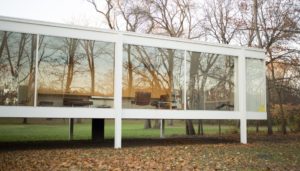 If you were to speak to the owner of a midcentury modern property eventually the topic of maintenance would come up. After all, literally living in a glass house has a unique set of upkeep considerations. Glass, wood, metal, and other staples of this genre need constant attention, and flat roofs notoriously leak. So you take the good with the bad At the end of the proverbial day, clean and crisp design plans play very well with ceramic tile and stone.