Slightly over one hundred years ago, “By the Beautiful Sea” was a popular tune lyrically delivering what would today be called a “lifestyle”. How else can we describe the jaunty words, “by the sea, by the sea, by the beautiful sea…you and me, you and me, oh how happy we’ll be”? Less than seventy years later, renowned architect Andres Duany delivered his masterpiece. Located in the Florida Panhandle and etched eternally in our psyche is Seaside & American Urbanism. 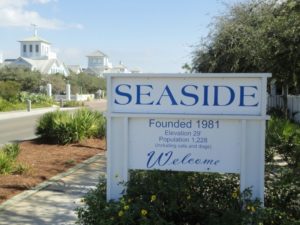 How did this stretch of Florida become internationally known for its architecture and the quality of its streets and public spaces? And how did a place informed by small towns of the past launch a movement in urban design? Seaside began with the vision of Robert Davis, who inherited 80 acres of sand and scrub in the Florida Panhandle from his grandfather. With his wife Daryl, he spent two years driving around the South observing the character of the small towns; what they learned inspired the creation of Seaside. As noted in the book Seaside by Steven Brooke, Davis wanted to create “an environment that would draw people out of their houses and onto their porches.” 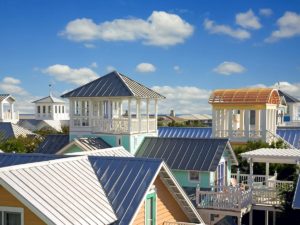 Characterized by walkable neighborhoods with public spaces, Seaside is one of the first places in America designed on the principles of New Urbanism. These planned communities feature pedestrian-friendly, mixed-use neighborhoods that combine residential, retail, and recreational uses. In these communities “the role of the street is social as well as utilitarian,” notes Seaside designer Andres Duany.

Reading about Seaside’s history and evolution, one is struck with it being where “a space” became “a place.” Seaside’s sense of community is the antithesis of the suburban sprawl that characterizes modern development. The community’s website describes it as “a place so easy to get around, sneakers would be a primary mode of transportation, ‘congestion’ just a cluster of kids riding bikes and no destination more than a five-minute stroll away.” Perhaps it is these characteristics that led to Seaside’s inclusion in the Florida chapter of the American Institute of Architects list of Florida Architecture: 100 Years 100 Places. 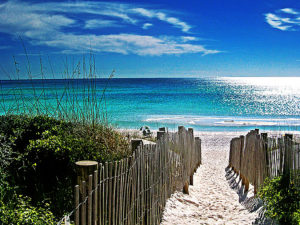 As a citizen of the stone and tile space, I recognize and accept a certain responsibility to acknowledge architectural and design greatness. It is in that spirit that this post is offered. In conclusion, I would like to thank Dr. Theresa Ferrari, a childhood friend, for her assistance in researching and producing this post. Thanks for reading.