The Spirit of Architecture – Art Deco

Any discussion of today’s topic, The Spirit of Architecture – Art Deco, should probably start with some historical perspective. The first thing to consider is that the term “Art Deco” refers to far more than a highly stylized approach to architecture. Instead, it is really an encompassing design approach that erupted from the modernism of the 1920’s to take hold of fashion and design. Let’s discuss this a bit more. 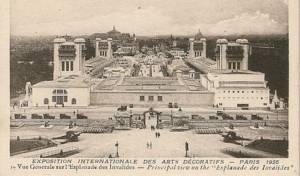 The style, the movement, and the name originated with the Exposition Internationale des Arts Décoratifs et Industriels Modernes, which was held in Paris in 1925. According to Lynn Palermo, a French professor at Susquehanna University, the goal of the fair was that “the French intended to reclaim commercial and aesthetic leadership in the decorative arts, an industry which France had traditionally dominated. According to the exposition organizers, development of an original style to signal a clear break with the pastiches of the nineteenth century would be crucial to this enterprise.” The exhibition lasted for six months and has resonated around the world ever since. Interior decor, jewelry design, shipbuilding, sculpture, textiles, painting, automotive design, glass work, graphic design, architecture, and more were indelibly influenced by this one seminal event. 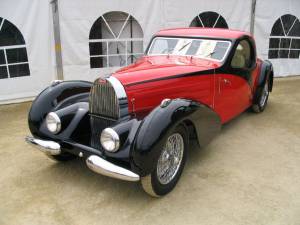 Let’s get back to architecture. We have posted previously in this space on Art Deco Fireplaces. In that instance, the discussion revolved around the Art Deco architecture of Manhattan as opposed to the Art Deco of Miami Beach. A passage from that post was “some of my earliest memories as a young man are of being taken to the Chrysler, Radio City and the Empire State, and wondering why my house in suburbia did not look that way. As a grown man, in 1981, I recall vividly sitting at the Avalon Hotel on South Beach and staring at the ocean over drinks. So, for me, it’s all good as the young people say.” The differences between the two Art Deco styles were not then, or now, very important to me. Instead, they simply added to the fun. Vive la différence. 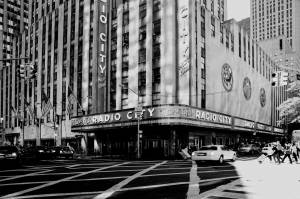 Let’s look at few things starting with Radio City Music Hall, which was completed in 1932 as part of the grand Rockefeller Plaza plan. The architect was Edward Durell Stone, and the interiors were the work of Donald Deskey. Many of the innovations in the auditorium, such as the split stage, the curvilinear ceiling for superior acoustics, and the dramatic hidden lighting still dazzle audiences. Although I may risk falling into the dreaded “cliché zone,” Radio City is not to be missed on any tourist visit to Manhattan. 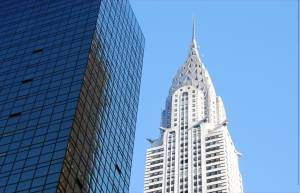 What would Art Deco be without the Chrysler Building? Who knows? What we do know is that the Chrysler was borne of the Roaring Twenties, a time of real estate speculation in Manhattan where developers were battling for prestige of all types, and taller was better. The original developer of the project was a man named William Reynolds, and he made the choice of the architect, William Van Allen. To make a very long story short, Reynolds sold control of the development to Walter Chrysler of automobile manufacturing fame. That transition would prove crucial to many of the now legendary details.

ArchDaily does a nice job in saying: “The Chrysler Building is a classic example of the Art Deco style, from the street to its terraced crown. Interior and exterior alike, it is admired for its distinctive ornamentation based on features that were also found on Chrysler automobiles at the time.” The fact is, to experience it is more than that. 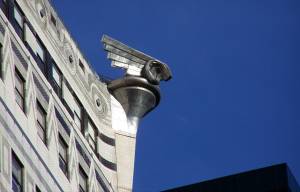 The ethereal stainless-steel skin from the German manufacturer Krupp, the gargoyles, the replicas of Chrysler automobile hood ornaments, the sunburst illusion beneath the spire, the African stone walls in the lobby, the ceiling mural, etc., etc. It’s all there as a visual immovable feast. 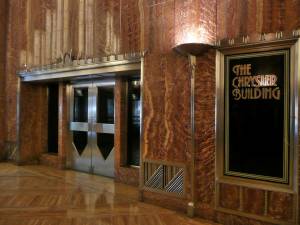 The Chrysler Building formally opened in 1930 and was, for about eleven months, the tallest building in the world before being eclipsed by the Empire State Building. Ironically, some of the best views of the Chrysler are from the Empire State Observation Desk. My last visit confirmed prior thoughts that the lobby alone is worth a hundred visits. It is space so magical that even jaded Manhattanites occasionally pause to take it in. Le Corbusier said the building “was hot jazz in stone and steel.” Let that be the last word. 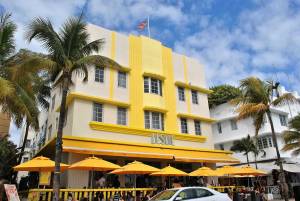 It may seem hard to believe in 2020, but the place so grandly known today as “South Beach” was headed for a date with the wrecking ball in the 1970’s. A significant portion of south Miami Beach, where the Art Deco architectural style had once been so beautifully expressed, had fallen into a sullen dilapidation. The demographics of the neighborhood tended towards elderly, retired, and fixed income, with a dose of homeless mixed in. The developers were eager to scoop up the old buildings for a song, and start over on the prime beachfront locations. 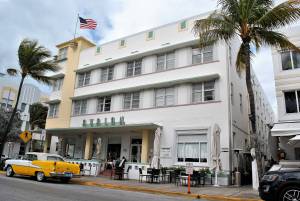 Luckily for all us, a robust group of preservationists came to our cultural rescue. The Miami Design Preservation League was formed. One of the most vocal and colorful of the crusaders was Barbara Baer Capitman. The New York Times paid high tribute in titling her 1990 obituary: “Barbara Baer Capitman, 69, Dies; Created Miami Art Deco District.” While she may not have created it, her endless agitations and advocacy certainly helped save the District. 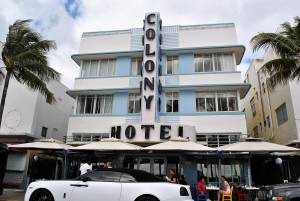 The area was formally recognized on the National Register of Historic Places in 1979, a great victory to say the very least. Instead of tearing them down, the iconic hotels were renovated and a worldwide tourist destination came to life. This might be a good time for a recap. The aforementioned Miami Design Preservation League does a great job below in telling you what to look for in your search for tropical Art Deco authenticity:

Art Deco is admittedly a tad quirky, and maybe not for everyone. What cannot be denied is the unique gravitas of a space like the Chrysler Building lobby, or the tropical frivolity of the Miami Art Deco District. Thanks for reading and be safe.

Please check out our sponsor below.

Evans Design Studio is a specialist in all forms of digital marketing. The manner in which you communicate with your clients has changed. Learn about “Marketing from a Distance.”