The Spirit of Architecture – Mid-Century Modern

Our post today is The Spirit of Architecture – Mid-Century Modern. Given that the Mid-Century in question is a full seventy years ago, the entire idea of it being Modern might seem a bit of an oxymoron. Rest assured that the style, as expressed in architecture, furniture, graphic design, appliances, interior design, lighting, industrial design, and more, was a natural expression of, and contributor to, the Jet Age in the Post-War United States. However, it is quite difficult to define an exact MCM period. Architectural Digest says “the movement spanned from about 1933 to 1965.” We’re good with that. Here we go. 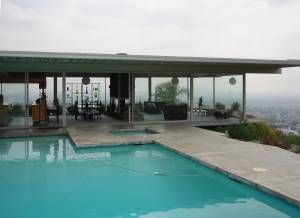 MCM, to shorten Mid-Century Modern, was a logical progression from The Bauhaus and International Style. Architects such as Le Corbusier and Mies van der Rohe were participants of great significance in all three styles, and it is easy to see parts and pieces of the earlier approaches in MCM. Other forces in American society were practical contributors. Post-War America was proud, prosperous, and consuming technology while moving to the suburbs en masse in their now classic automobiles. Mid-Century Modern was a superb fit for the time period.

The characteristics of MCM are not always clear, especially since a recent revival has created a variety of “strains.” That said, let’s outline a few points:

By no means is the above list all encompassing. Many episodes of Mad Men will broaden the range. Let’s take a look at some classic MCM homes, two pieces of furniture, and a lighting element. 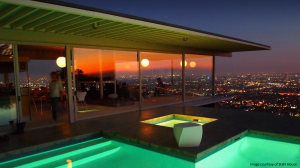 Nothing can ever more perfectly symbolize the MCM style than The Stahl House in Hollywood Hills, California. Years ago, I was lucky enough to take the tour on a relatively smog free day. It was epic. The home was designed by architect Pierre Koenig and completed in 1959 for Buck Stahl. While we were fortunate  to see it in person, anyone who ever watched a TV show or went to the movies has probably also had a peek. It has been a set location for more productions than can be listed here. When the world normalizes please go see it. Until then, it is shown in the two images above.

Not far from the Stahl House is the Chemosphere, or Malin House,  designed by architect John Lautner. Since it is difficult to describe what appears to be a spaceship hanging from the side of a mountain, let’s take this from the L.A. Conservancy: “If you had to choose one building to represent the most Modern of iconic Modern designs, you might well choose the Malin House (Chemosphere) in the Hollywood Hills. An octagon perched atop a twenty-nine-foot high, five-foot-wide concrete column like a flying saucer on a stick, the Chemosphere is recognizable even to those who know nothing else about mid-century architecture. 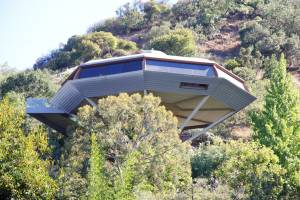 It was designed by groundbreaking architect John Lautner for Leonard Malin, a young aerospace engineer with a steeply sloping lot and $30,000 to spend on a house that would somehow perch upon it. Thanks to Lautner’s ingenious design and sponsorships by companies like Chem Seal (who provided experimental coatings and was rewarded by the building’s name), Malin got his wish. Malin and his wife raised four children in the house.”  I saw it accidentally one day  by looking up at the right time. Wow!

We have discussed Eero Saarinen at length in other posts, but there is always more to explore. His Tulip Chair was designed in 1955 and 1956 for Florence Knoll and the New York based Knoll furniture. Florence and her husband, Hans Knoll, built their firm into what I consider to be one of the truly iconic vendors of modern office furniture pieces and space planning consultation. The comprehensive Knoll site discusses Ms. Knoll, saying that “in creating the revolutionary Knoll Planning Unit, Florence Knoll defined the standard for the modern corporate interiors of post-war America. Drawing on her background in architecture, she introduced modern notions of efficiency, space planning, and comprehensive design to office planning. Florence ardently maintained that she did not merely decorate space. She created it.”  The Tulip Chair is considered a masterpiece of American industrial design and was patented by Saarinen in 1960. 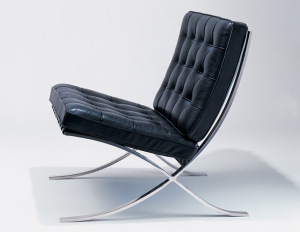 Sticking with MCM furniture for one more second, take a look directly above at the Knoll Barcelona Chair. I don’t feel like we are taking too big a risk in saying that everyone who has ever sat in a professional office waiting area has seen the Barcelona Chair at least once. In Architectural Digest, Don Boehm of Boehm Design says, “It looks as good as it did in 1929, when it was designed for the International Exposition in Barcelona, Catalonia, Spain,” says Don Boehm. [It’s] able to fit into a contemporary or traditional setting.” 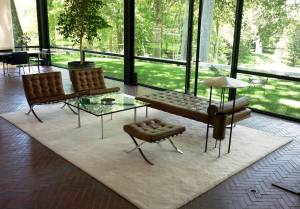 The piece attained cult status in 1949 when the chair was grouped with the ottoman and couch in the Phillip Johnson Glass House in New Canaan, Connecticut, as shown above.  The Museum of Modern Art in New York claims that “although only two Barcelona chairs were made for the German Pavilion, the design was put into production and became so popular that, with the exception of one sixteen-year period, it has been manufactured since 1929.” 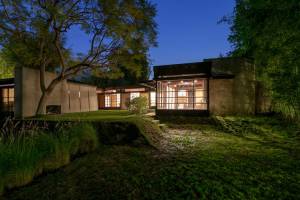 The Schindler House in West Hollywood, California, has long been on my bucket list. Built fairly early in the Mid-Century Modern timeline, the residence was designed by Rudolph Michael Schindler, and the story goes that the effort was an experiment at the behest of his wife Pauline. According to the MAK Center for Art and Architecture, “The house was conceived as an experiment in communal living to be shared with another couple, Clyde and Marian Chace.  There were four rooms, one for each person to “express his or her individuality.”  The communal gathering areas were patios in the garden, one for each family.  There was a shared kitchen and outdoor sleeping porches were provided on the roof.  A guest apartment with its own kitchen and bath extended from the rear of the house.”

Schindler was his own client for this project and that might have been the only way that it could have gotten built. Born in Vienna in 1887, his architectural theories began with the concept that contemporary materials and methods, not legacy styles and approaches, should be the genesis of architectural form. He fervently espoused what he labeled “Space architecture,” which revolved around the design of interior space as an overall guiding principal. Schindler worked almost exclusively in Southern California and passed away early in 1953 before many of his ideas reached greater prominence. 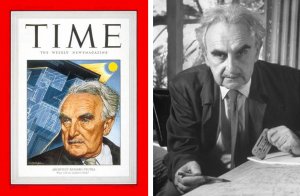 Let’s move on to Richard Neutra another Vienna born architect who was to take his place as the highest of the high arbiters of crisp, clean, California modernism.  He may not be as well known today as some other architectural luminaries, but in 1949 he graced the cover of Time Magazine and was placed in the same rarified air as Frank Lloyd Wright. Time said of his houses: “Their beauty, like that of any sea shell, is more than skin-deep—practical, not pretentious.” 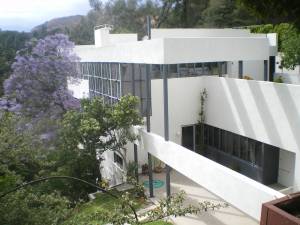 The Lovell House, as shown above and below,  is often considered  to be the Neutra masterpiece. Architectural Digest said “the project that made Neutra an architectural sensation was this 1929 residence for Leah and Philip Lovell, a naturopathic physician known for his love of modern architecture. Located in Griffith Park, the Lovell Health House, as it is also called, is considered an International Style masterpiece, its steel frame spray-coated with gunite and faced with immense windows.” A compilation of the MCM virtues of glass, metal, and clean lines, this work is probably now best seen in the film L.A. Confidential. Sadly, as recently as January 2020, the home was on the market as somewhat of a “fixer upper.” Archpaper.com tells us that  “in its current state, however, the house suffers from significant cosmetic and structural disrepair and the owners are reportedly looking to offload the building.” Let’s hope a buyer with a sense of architectural history is found. 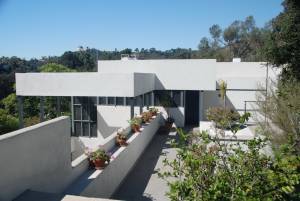 As discussed previously, MCM was more than architecture. Greta Von Nessen was a Swedish born industrial designer who married another industrial designer, Walter Von Nessen, and moved to New York in 1925. There they set up shop as Nessen Studios. Their thing was designing and producing electrical lighting with a style tilt towards Bauhaus Modern. After her husband passed away, Greta took the reins and produced the glorious  Anywhere Lamp below. The “anywhere” referred to how the lamp might be utilized. It could sit on a desk, be wall-mounted as a sconce, or hung from the ceiling. 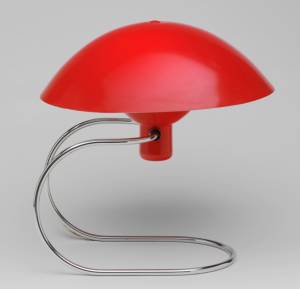 Modern Magazine gave props to this work, saying that “with its smooth, curved form made of industrial materials, and its minimal use of color, the lamp is a prime example of postwar modernism applied to lighting design.”  The lamp was included in the Museum  of Modern Art’s Good Design exhibition of 1952, again at MOMA in 2019 in the Value of Good Design exhibition, and memorialized on a postage stamp in 2011. Not just another lamp. 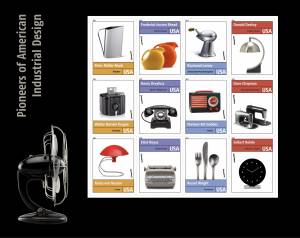 The middle of the 20th century was an interesting time. America bubbled with enthusiasm and promise. The rest of the world was well on the way to recovering from the ravages of WWII. Despite the threatening menace of the Cold War, the average American was hopeful for the future. If nothing else, Mid-Century Modern had swag. Folks wanted some of that then and still want some now.
This is a good time to close this post. Stay tuned for a Part Two on Mid-Century Modern. Be safe, and message me with suggestions, questions, or ideas. John Valentine 305-986-1046.