Ludwig Mies van der Rohe achieved that quintessential level of fame where you are referred to by only one name, in his case, “Mies.” He was born in Aachen, Germany, in 1886 and emigrated to America in 1937, settling largely in Chicago. Today we have The Spirit of Architecture – Mies van der Rohe. 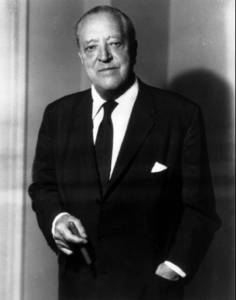 Prior to arriving in the States, Mies had already garnered a measure of fame in architectural circles as the last leader of the German Bauhaus School. Also, he was acknowledged for his work on projects like Villa Tugendhat below. Although I have never been to Brno to see it for myself, the clean, light elegance of the home pleases my eye. Also, as an amateur historian, the sad story of the disrepair the building fell into at the hands of the German and Russian armies in the later days of WWII is a fascinating story in and of itself.

Jumping to a personal favorite of mine, take a look below at an essential piece of any Chicago architectural tour, 860-880 Lake Shore Drive. Writing a few years ago Deirdre Gould from Columbia University said: “The apartment towers at 860-880 Lake Shore Drive, completed in 1951 and designed by Mies van der Rohe, are considered among Chicago’s most famous and prestigious addresses. Capturing the sentiment of ‘modern living’ reflected in the composition of glass and steel, the towers reflect both the sentiment of the mid-twentieth century and the role of architecture in reflecting the aspirations of its generation of architects. They also mark a point of when the Chicago School of Architecture (started by Louis Sullivan, Burnham and Root et al.) reaches its ‘height of modernism,’ as exemplified by their glass and steel construction, high-rise structure and curtain wall façade.”  This work IS Chicago. 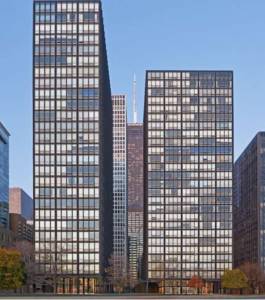 The Seagram Building in Manhattan symbolized the America of the post-WWII era, a country astride the world like Colossus, basking in the temporary glow of Pax Americana. Seagram forever linked van der Rohe to Phillip Johnson, given that it was Johnson who connected Mies to the Bronfman family, the owners of the Canadian distillery. 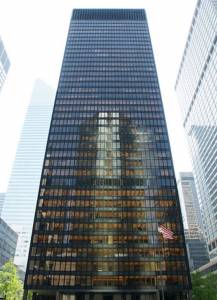 Completed in 1958, there is a piece of this story often lost to history, that being the vast contribution of Phyllis Lambert. As the daughter of family leader Joseph Bronfman, it is Ms. Lambert who drove the project and managed the occasionally contentious Johnson/Mies relationship. In terms of the incredible budget overruns, legend has it that one of the building contractors told her she could save money on something or other. No one would see this particular element anyway was the argument presented. She did not approve the changes, saying that “God would know.” Speaking of Ms. Lambert, Rem Koolhaas said “Phyllis Lambert has made a huge contribution to architecture Without her participation, one of the few realizations in the 20th century of perfection on earth — the Seagram Building in New York — would not have happened.” 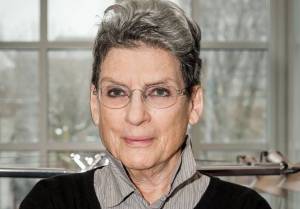 The most devout Mies disciples will always bring up the S.R. Crown Hall in Chicago as an example of an overlooked work. In my view, they are correct. Jennifer Lagdameo writing in Dwell.com said: “Completed in 1956, Crown Hall is the home of the College of Architecture at the Illinois Institute of Technology in Chicago, Illinois. Widely regarded as one of Mies van der Rohe’s masterpieces, Crown Hall beautifully illustrates his basic steel-and-glass construction technique. Mies considered the building to be the embodiment of his famous statement, ‘less is more.” Crown Hall is slim, elegant, and beyond reproach. 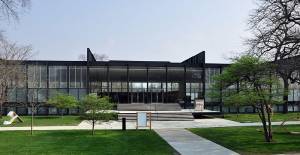 There are so many legends, fables, anecdotes, and tall tales about The Farnsworth House that I think it might make sense to start from a baseline. Here is what the reasonably comprehensive website tells us: “The Farnsworth House, designed and built in the International Style by architect Ludwig Mies van der Rohe for Dr. Edith Farnsworth from 1949-1951, is one of the world’s most widely-recognized and studied structures constructed in the 20th century. As one of the pinnacle works of Mies van der Rohe’s style and philosophy, it remains an international pilgrimage site for thousands of architecture students and professionals annually.” 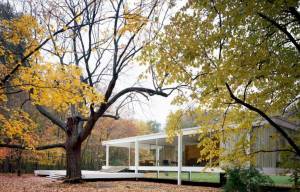 Recognizable for the floor to ceiling glass, the house was built for weekend getaways and notoriously lacked much in the way of closets, storage space, etc. Notoriously, Dr. Farnsworth ended up in litigation with Mies over cost overruns and other underlying issues. Sad to say, but I barely recall my only visit other than an overriding sense of sterile. It is now part of the National Trust for Historic Preservation, which, in better times, offers public tours.

Ludwig Mies van der Rohe passed away in 1969 in Chicago. He left behind architectural works that became symbols more than just buildings. He helped form an entire historical period in the United States. Needless to say, this is far from a comprehensive discourse on Mies. To add to your knowledge, an excellent book to read is “Building Seagram” by the aforementioned Phyllis Lambert. Thanks for reading.

This is a new series, with a new sponsor below:

Evans Design Studio is a specialist in all forms of digital marketing. Times have obviously changed. The manner in which you communicate with your clients also must change. Learn about “Marketing from a Distance.”