More Mid-Century Modern is always good. Today, we follow up from last week with two legendary furniture pieces, a few more residences, three clocks, and Charles and Ray Eames. Let’s get to it. 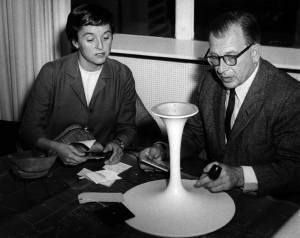 Previously, we discussed architects such as Richard Neutra, Pierre Koenig, Rudolph Schindler, and John Lautner. Then furniture pieces from Eero Saarinen, Mies van der Rohe, and Florence Knoll. For good measure, we added a lamp by Greta Von Nessen. That said, let’s recap a few basic elements that you will see in Mid-Century Modern, or MCM: 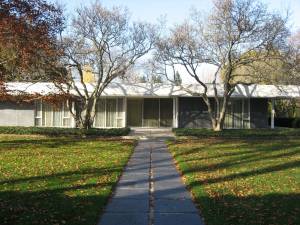 The Miller House in Columbus, Indiana, was a Saarinen design completed in 1957 for corporate executive J. Irwin Miller and his family. As most of you know, the architect was not nearly as well known for residential architectural design as for his iconic commercial endeavors. In this case, ArchDaily pointed out that he “worked with interior designer Alexander Girard and landscaper Daniel Kiley to best fulfill the ideas he had in mind for the house and garden,” and a case can be made that they softened the project. This metal and glass MCM masterpiece is on my bucket list. Take a look above and below. 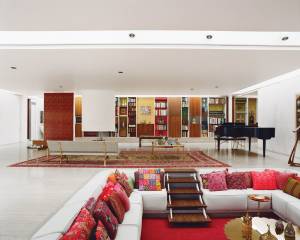 Charles and Ray Eames literally changed the world. They were a “power couple” long before the phrase had been coined. This husband-and-wife design team helped give form and shape to the entire 20th century with their furniture and architecture. Just a few years ago BBCCulture wrote that “their work remains the benchmark for all designers – not just for their aesthetic sense but for their irrepressible joie de vivre. Their mantras work just as well for any area of creativity: notice the ordinary; preserve the ephemeral; don’t delegate understanding; explain it to a child.” 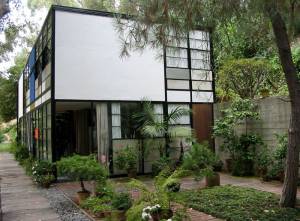 The Eames Foundation now maintains the family home, shown above, and tells us that “The Eames House, also known as Case Study House No. 8, is a landmark of mid-20th century modern architecture located in the Pacific Palisades neighborhood of Los Angeles. It was designed and constructed in 1949 by husband-and-wife Charles and Ray Eames to serve as their home and studio. They lived in their home until their deaths: Charles in 1978 and Ray, ten years to the day, in 1988.” I have made only one visit here, but recall thinking that it would be very livable rather than simply existing as an architectural abstraction that happened to have been built.

The house is also a major functioning example of the De Stijl Movement in the United States. If the panels below remind you of a Mondrian painting, you are on track. Piet Mondrian set out many of the principles of color, form, and orderliness that De Stijl adhered to. 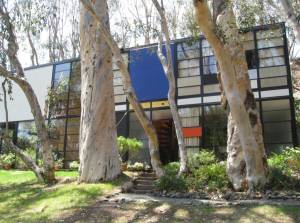 No conversation on Mid-Century Modern style, as expressed in furniture, can exclude the Eames Lounge Chair and Ottoman designed for the Herman Miller furniture group. Released in 1958, these iconic design touchstones are composed of relatively pedestrian molded plywood and leather. Dwell gives us some background: “The couple already had significant experience working with plywood. Applying heat and pressure, Charles and Ray had molded it for use by the U.S. Navy during WWII. Following the war, they continued to experiment with the material. The resulting smooth curves of molded plywood on the Eames Lounge and Ottoman were unprecedented in furniture design at the time. The chair is upholstered in leather and has an aluminum base.” 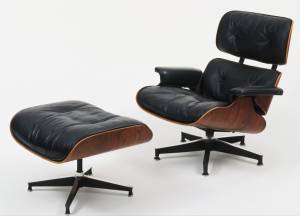 Charles and Ray Eames did not fit the mold of the “unknown starving artists.” To the contrary, they were “rock stars” of design in their lifetimes. “Charles and Ray Eames were especially well suited partners for America’s progressive industries,” writes the design historian Donald Albrecht. “Young and successful, the Eameses embodied a forward-looking perspective that fit well within the nation’s expanding capitalist economy.” Enough said. 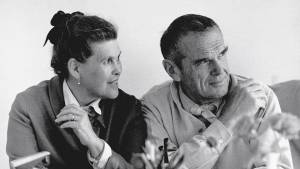 Quite the opposite of the Eames’ was Greta Magnusson Grossman. The formidable L.A. Conservancy says: “Born in Sweden, she was a successful industrial designer creating furniture, lighting, and other designs, and she continued that work when she moved to the U.S. Once in California, she began taking on architectural projects, eventually completing at least fourteen homes in Los Angeles. Two of them were for Frances Nelson, sited on adjacent hillside lots above Cahuenga Pass, and are wonderfully intact to this day.” 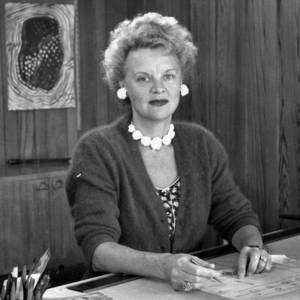 Again, while not the worldwide phenomenon of other MCM architects, Ms. Grossman had a devoted Southern California following that included Greta Garbo and Jim Backus. She did a house for Backus in 1950. FYI for the non-boomers, he is the “millionaire” on Gilligan’s Island.

I was compelled to include this designer based on the amazing Nelson Houses, mentioned above, that were completed in 1954. Once more from the L.A. Conservancy: “The Nelson houses reflect Grossman’s use of simple deck construction; unlike some other Modern hillside designs that step up or down a slope, the Nelson houses each sit on one level slab extending through the entire enclosed space, and are cantilevered out over their slopes.” They are shown below. 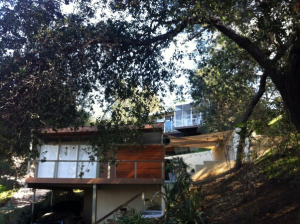 George Nelson, no relation to the client above, is another Mid-Century Modern designer who may not be well-known to the average citizen, but almost all of us have seen his work.  Nelson was a Yale-educated architect who turned to product design when architectural commissions were scarce. He was the Director of Design at Herman Miller from 1945 to 1954, then later as George Nelson Associates he created the clocks below for Herman Miller’s brother Howard. The mesmerizing Ball, Sunburst, and Asterisk clocks are below.

Le Corbusier was born in 1887 as Charles-Édouard Jeanneret in Switzerland. One of perhaps two handfuls of architects that defined Modern Architecture in the 20th century, his work included urban planning, painting, writing, and furniture design, spanning the globe in reach. 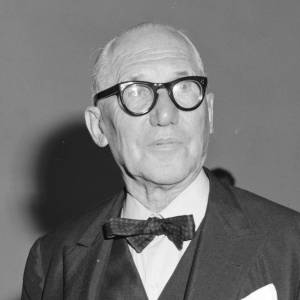 Given all his brilliance, it is still hard to imagine that he would have foreseen the future of the Grand Confort chair. Over a decade after his passing, a piece he designed in 1928 with Pierre Jeanneret and Charlotte Perriand would be thrust into pop culture in the Maxell “Blown Away Guy” advertising campaigns. Take a long look below and try to remember the first time you saw the commercial.

In writing these two posts on Mid-Century Modern architecture and design, I was reminded of a few things. The style was, and is, really fun. The lack of formality minimizes pretension and maximizes comfort. Even today, odd as this may sound, MCM still appears to symbolize the future. And so it goes.

This is probably the last post in the series. It has been fun and I hope they have provided a diversion in less than ideal times. I can be reached at 305-986-1046.
John Valentine